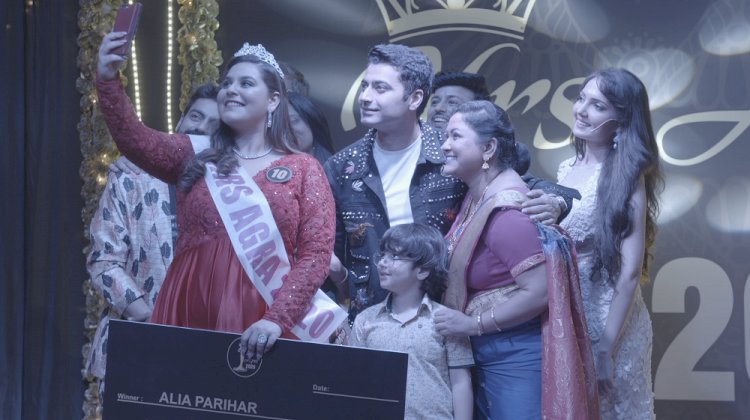 The intense battle between the two beauties of Sony SAB’s Tera Kya Hoga Alia comes to a final showdown, where bubbly Alia won everyone’s hearts and won the title of Mrs. Agra 2020. The show is set to take the viewers through various challenges of Mrs. Agra contest where their beloved Alia (Anusha Mishra) and her opponent Tara (Anusha Mishra) will be seen showing off their skills.
Tara constantly tries to sabotage Alia’s performance during the contest by damaging her heals which breaks when Alia walks the ramp and she falls. Alia despite the fall keeps her spirits up and continues to walk with a brave face and completes the challenge.
Things take a scary turn for Alia, as the last challenge of the contest is to share thoughts about Agra in only English. Tara becomes confident as she is fluent in English but Alia gets worried as does not know how to speak English but Alia’s ‘never-give-up’ attitude pushes her to prepare her speech for the finale around.
The stage is set and the final contestants are prepared with their speeches.
Join the celebration as Alia wins the pageant by overcoming all the hurdles in her way.
Anusha Mishra, essaying the role of Alia said, “Alia’s entire journey for Mrs. Agra 2020 was full of challenges and she has proved that she can overcome hurdles to stand for something she is passionate about. The last challenge of the contest sends a beautiful message across as she overcomes her fear of speaking in English and finds a way to share her reason of participating in the contest. The viewers will enjoy the upcoming episodes as it will take them through various emotions and leave a big smile on their faces. So stay tuned to know what Alia has to say.”

Zafar to take control of all the genies