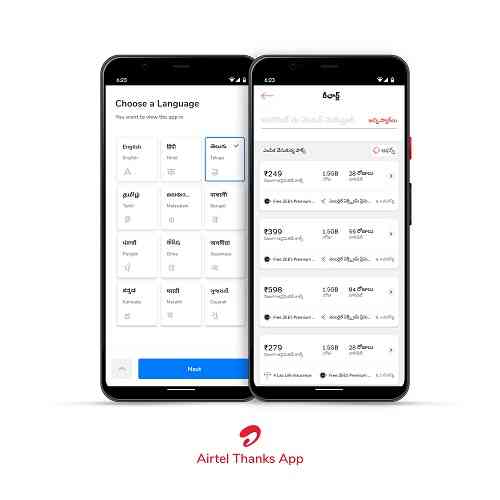 Hyderabad: As part of its mission to simplify the customer journey through innovative digital interventions, Bharti Airtel (“Airtel”) today announced the launch of Telugu support on Airtel Thanks app for prepaid customers. The feature is LIVE on Android and will be available on iOS shortly.

With increasing smartphone penetration, particularly in smaller towns and villages, customers are looking for vernacular online experience. This new feature on Airtel Thanks app will drive more adoption as well as make the user experience simpler and highly interactive for Airtel customers by removing language barriers.

Airtel Thanks app is the digital gateway to all Airtel services. It comes with a customised interface – Silver, Gold, Platinum – based on customer ARPU. The app allows Airtel smartphone customers to access Digital Self Care - make recharges, bill payments, checking real time data usage/balance details. Customers can also log service related issues through the app in a matter of few clicks. The app also offers access to digital payments and financial services along with preview of Airtel’s digital entertainment library.

Says Adarsh Nair, Chief Product Officer, Airtel: “At Airtel, we are obsessed with solving customer problems and making their experience better through digital technologies. As India transforms into a smartphone nation, close to 35% of Airtel Thanks app users now come from Tier 2/3 towns and rural markets. With deep vernacular support, Airtel Thanks app becomes even more relevant and accessible for these customers and enables them to unlock the full potential of Airtel’s exciting digital services.”

Airtel Thanks app has been fully designed and built by the in-house engineering team of Airtel.

Airtel Thanks app now available in Hindi and Punjabi for Airtel Prepaid customers
Chandigarh: As part of its mission to simplify the customer journey through innovative digital interventions, Bharti Airtel (“Airtel”) today announced the launch of Hindi & Punjabi support on Airtel Thanks app for prepaid customers. The feature is LIVE on Android & will be available on iOS shortly.

NMDC embarks on Greening of Dantewada district in Chhattisgarh

WayCool achieves INR 1000 Crores ARR and gears up for next...

Webinar on pre-shipment and post shipment credit and export...