A tribal boy makes it to Navy through Sailing, thanks to Yacht Club 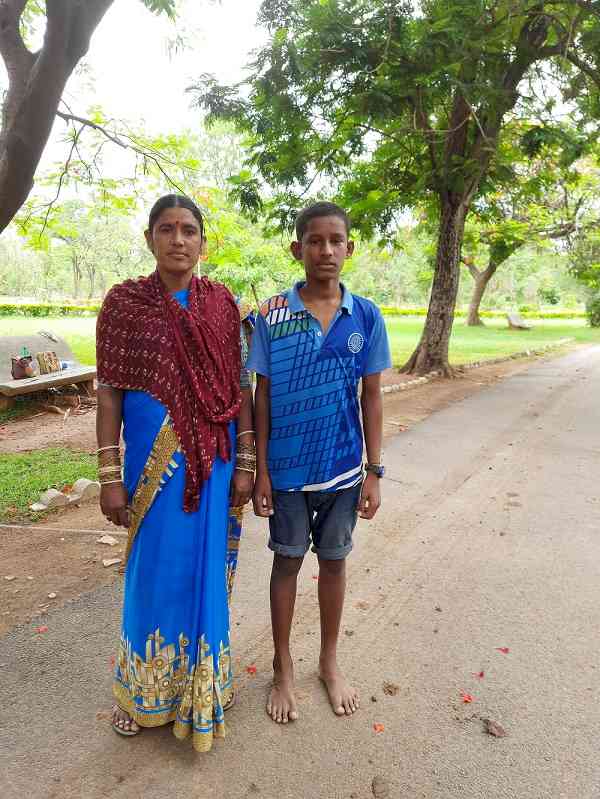 Sunil Mudavat with his mother Buddabai heading off to the Navy Boy Sports Company at INS Mandovi.

Hyderabad: Little did Sunil Mudavat,14 or his mother of tribal descent know that a casual volunteering to learn sailing at the Yacht Club Foundation would lead to his career in the Navy.

Hailing from Rampurthanda at Vikarabad, child to small farm labour, Sunil's father passed away in 2008 when Sunil, the youngest of four kids, wasn't even a year old. He was an alcoholic, who abused his wife and left the burden of taking care of their four kids on her. His mother, M. Budda Bai works in farms as labour, a profession their family has held for generations.

Sunil was inspired by his cousin Vamshi a Swearoe and a YCH Foundation sailor, who was accepted by the Navy. Sunil moved to Hyderabad in the year 2014 in second grade and studied at Government High School Mudfort, Secunderabad.

He stayed at the Telangana Tribal Welfare Hostel, Bowenpally, from where he first joined YCH in 2018.

’Sunil is young and talented and has an incisive mind when it comes to sailing and is the first and only tribal boy selected by the Navy“ said his coach Suheim Sheikh also the President of The YCH Foundation. “The work we are doing at the YCH is truly rewarding and fulfilling when our sailors get placed“ he added.

Sunil wishes to serve well in the Navy, earn more medals for the country, and one day become a coach like Suheim himself, inspiring and training another generation of skilled sailors.

The YCH Foundation has enabled the recruitment of a whopping 19 children  from Telangana into the sport. The kids are sent for the selections to both wings of the armed forces who run Boy Sports Companies and have large sailing centres at Krishnaraja Reservoir Mysore and the training centre at INS Mandovi at Goa with the Army and Navy respectively.

"We are proud of the fact that 9 of the 19 selected are Swaeroes from various villages of Telangana including Vishvanath Padidala who is off to Italy for the Worlds",  said Mr.RS Praveen Kumar, IPS who heads the Telangana Social Welfare Residential Schools.

The Army boys join today and the Navy boys on the 30th of June and interestingly return to participate at the Monsoon Regatta scheduled for July 30th at Hussain Sagar to represent their new sailing schools.

Once recruited to the Navy school the kids are provided with superb education facilities at the nearest Kendriya Vidayalaya and top of line training , nutrition and fitness and the boys are prepared for a career in the forces. Based on final medical, fitness and academic tests and an interview the kids re-absorbed at various levels but get the opportunity to participate even at International events.

At the last 2019 Asians at Oman, 7 of the 10 sailors selected to represent India were from YCH and at the recently announced world Championships at Italy 3 of the 5 going are YCH.

Almost 50% of the National fleet if not more are  from YCH or YCH alumni who have moved on to the Navy or Army.

"Its a matter of deep pride that a land locked state such as Telangana has produced so many sailors that are sailing in the high seas across the world", said an elated Lt Gen KS Rao, President of the Telangana Sailing Association himself an Arjuna Awardee and India's first  circumnavigator.

Of the 19 boys selected all are poor marginalised farmers or auto rickshaw drivers or house help and often single income or single mother families and some of the kids have already visited 2 to 3 International events in the Middle East and Europe even before they turn 15 with one of them Vishvanath Padidala of Hyderabad  leaving the Italy for the World Championships in July alongside Vaishnavi and Jhansi Priya of Udbhav School.

Aridane stars as Hyderabad take all three points against...