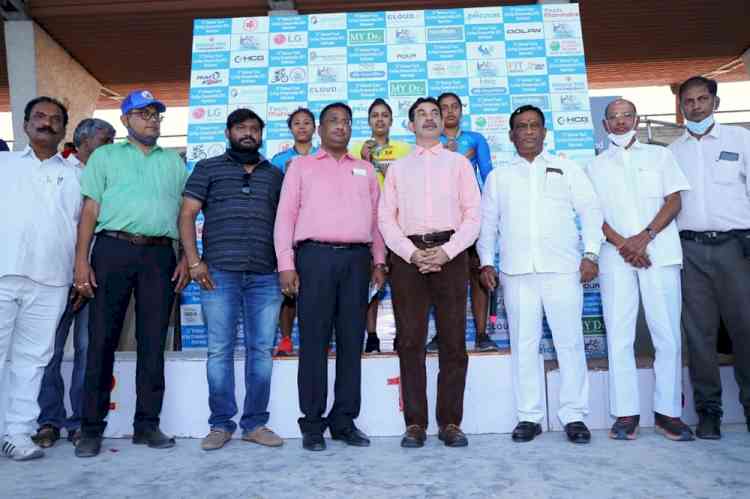 Jayesh Ranjan, gave away medals at the concluding function

Mr. Jayesh Ranjan, Principal Secretary, Govt of Telangana who also is the President of Telangana Olympic Association was the chief guest at the closing ceremony and gave away medals to the winners and record holders. S. Onkar Singh, Sec. General, Asian Cycling Confederation; Chairman of Cycling federation of India and Joint Secretary of Indian Olympic Association graced the Championship.

Accordingly Telangana Cycling Association (TSA) was asked to be ready to host Asian Track Championships in October this year.

In the Mens Elite Category in Team Sprint event the new record is set by team from Manipur comprised of K. Jemsh Singh, Y. Rojit Singh and Ronaldo Singh.  They broke their own record set in 71st NTCC Jaipur.  The old record of 01:03,977 is broken and the new record is 01:02.302

In Mean Elite Category,  Sprint ESOW from Andaman and Nicobar set a new record of 10.433 against their own record of 10.827.


The was held in Hyderabad from March 27th March to 31st March at Velodrome SATS, Osmania University. The five days event was hosted by Telangana Cycling Association

More than 700 cyclists, both men and women from across India are expected to take part in the event. They will compete in Individual Time Trail, Individual Sprint;  Individual Pursuit; Point Race; Keirin; Scratch Race; Team Pursuit;  Team Sprint and Flying Lap

The National Track Cycling Championship came to Hyderabad after a gap of 14 years.