A case under the NDPS Act has been registered 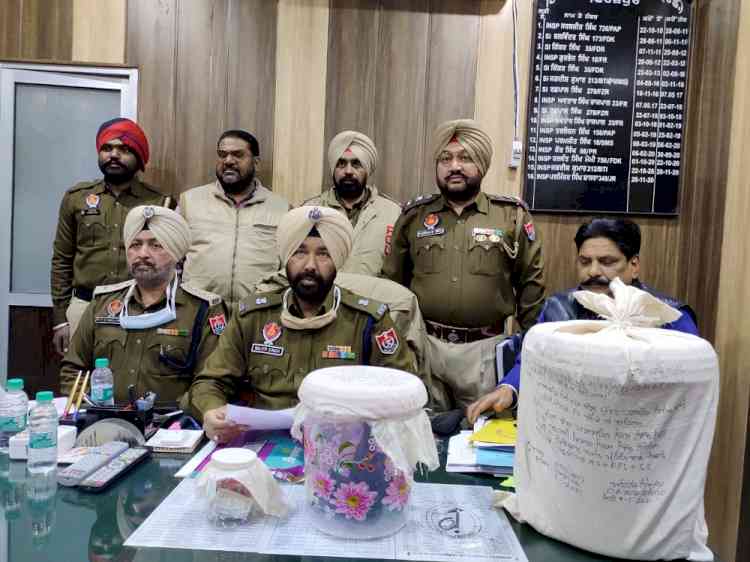 Ferozepur: One drug peddler has been nabbed by the officials belonging to Criminal Investigation Agency (CIA). Following the information provided by him, the police has recovered 5-Kg heroin worth Rs.25 crores along with one pistol (.30 bore), two magazines, 18 live rounds and Pakistani currency of Rs. 1100.

Giving details, Bhupinder Singh SSP said that following the inputs, the sleuths belonging to CIA, had nabbed the accused identified as Dalbir Singh alias Dallu, resident of Village Gatti Mathar in Lakho ke Behram area on Tuesday (January 5) and had recovered 250 grams heroin from him. The SSP said that following the recovery, a case under NDPS Act was registered against the accused at Lakho ke Behram police station (FIR No. 2 dated 05.01.2021).

“During the preliminary investigation, it came to fore that the accused Dalbir had links with Pakistan based drug smugglers and he was constantly in touch with them with help of social media. Following the information provided by the Dalbir, a joint search operation was carried out with sleuths belonging to 136 Battalion of BSF during which 5 kg heroin along with one pistol (.30 bore), two magazines, 18 live rounds and Pakistani currency of Rs. 1100/- was recovered near border pillar number 191/7 across the fencing.

"Save public park, save environment", say Residents of...

SAD demands dismissal of Ashu for meting out cruelty to...

Farmers’ protests not political, those who don’t oppose...