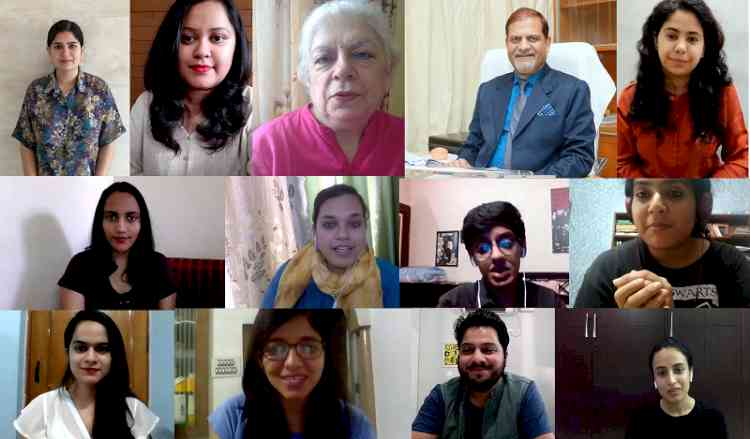 Chandigarh: The Department of English and Cultural Studies, Panjab University organized a seven day E-Learning workshop titled ‘Spring Up!’ from May 15 - 21, 2020. Under the guidance of Dr. Deepti Gupta, Chairperson of the Department and Pranav Kapil, Coordinator, the workshop brought various aspects of the study of language, literature and theory to students and teachers who are unable to attend regular classes due to the Covid 19 crisis. The workshop saw an enthusiastic response with over 1200 participants spread across India and abroad participating daily.
The seven day workshop comprised of a total of 21 sessions by 11 resource persons. Every day of the workshop was segmented into 3 sessions, one each on Language, Literature and Theory. Day 1 of the workshop began with sessions titled ‘And Yet They Spake Hem So’: A History of Language and Unlocking the Hoard: Introduction to Old English Poetry by Mr. Sanveer Bindra which was followed up by a session on Introduction to Theory by Mr. Pranav Kapil.
The language session on Day 2 had a lecture titled ‘The Tongue’s Old Dungeons’: An Introduction to the Anglo Saxon Language. The literature section had a session titled Geeky Greeks: Myths, Legends and Anecdotes from Greek Mythology followed by a theory session titled: Marxism and Feminism: A Marriage by Ms. Samridhi Sharma.
Day 3 began with a session on Introduction to Linguistics by Ms. Tamanna Gabba followed by Shakespeare’s Ghost by Ms. Seerat Chauhan and Doing Gender: What’s the Trouble, a session on Gender Studies by Ms. Akanksha Jawa.
The Language session for Day 4 was titled Sound Check: An Introduction to Phonetics. The session on literature was taken up by Ms. Akanksha Jawa in The Clash of the Civilization: Victorian Age and its Literature.
Day 5 of the workshop had a session titled Dissecting the Linguistic Body with Chomsky and Bloomfield by Ms. Hira Irshad, followed by I Own My Story: An Introduction to South Asian Literature by Ms. Anita Kasav and Waiting for the Kettle to Boil: Culture and Everyday Life by Ms. Urvi Sharma.
Day 6 had a session on language titled Morphology and Morphological Analysis by Ms.Hira Irshad. The literature section discussed American Literature under the session titled “I Hear America Singing”: An Introduction to American Literature by Ms. Anita Kasav. The theory session discussed Postcolonialism under the title Revisiting the Empire: A Post-colonial Point of View which was undertaken by Ms. Akanksha Jawa.
The final day of the workshop had a session on language by Ms. Tamanna Gaba titled The Linguistic Sleuth: An Introduction to Stylistics, followed by Ms. Anisha Patnaik’s session From Superheroes to Super Genre: An Introduction to Sequential Art through Comics, Graphic Novels and Comics Journalism. The final session of the workshop, titled Twenty First Century: ‘After Theory’ and Posthumanism, was taken up by Mr. Pranav Kapil.
The workshop received a very warm response from the participants. Dr. Tessy said that ‘the mind mapping involved in putting forth a workshop like this is commendable’. According to Mr. Surya, ‘Spring Up is indeed an innovative effort by the organisers to present a brief and comprehensive version of English literature giving equal importance to its relevance in today’s world’. Ms. Lakshmi felt that ‘The beautiful amalgamation of Language, Literature and Theory in three sessions is extremely useful to both faculty and students of Literature.’

It is time to recognize identity of migrants as there are...