The grand ceremony will be held in Guwahati on 15th February, 2020 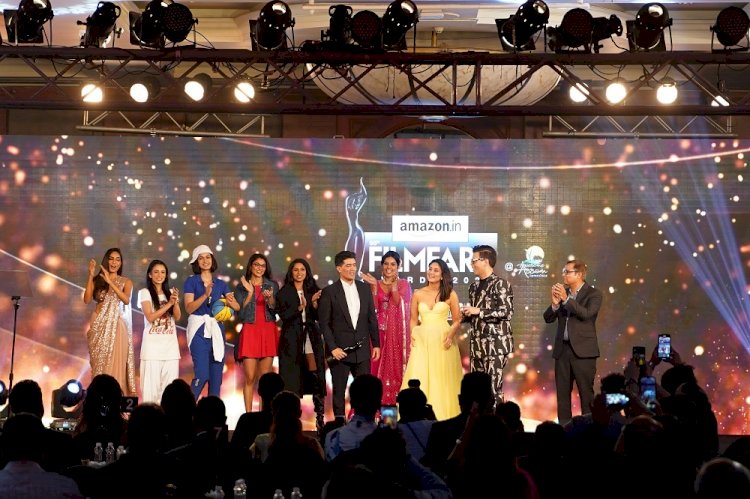 The 65th Amazon Filmfare Awards 2020 Curtain Raiser was an ode to all the heroes behind the camera who create and curate world class cinematic experience. The night brought together some of the most scintillating talent of Bollywood industry to bestow them with the ultimate cinematic honour of ‘Black Lady’. While the grand ceremony is set to be hosted on 15th February in Guwahati, the show unveiled the nominations which shortlisted some of the most incredible performances and films of the year.

Crème-de-la-crème of Bollywood like Kareena Kapoor Khan, Sonam Kapoor, Karan Johar, Kartik Aaryan, R Madhavan, Ananya Panday, Siddhant Chaturvedi, Tara Sutaria among many others who walked the red carpet in their most stylish avatar. This extravagant celebration hosted by the talented Neha Dhupia, began by lauding and commemorating the technical award winners with ‘The Black Lady’ for their outstanding work in their respective fields. The glamour quotient of the show peaked when ace designer Manish Malhotra was paid a special ode for completing 30 years in the industry, through a nostalgic fashion act showcasing his iconic creations. After this quick trip down the memory lane, the night shone spotlight on some gems under the Short Film Awards category.  Bebaak and Village Of A Lesser God was crowned the Best Short Film Fiction and Non-fiction respectively, Rajesh Sharma (Tindey) and Sarah Hashmi (Bebaak) bagged the trophy for Best Actor and Best Actress for Short Film respectively. And saving the best for the very end, the nominations for the grand ceremony to be hosted in Guwahati were announced.

Speaking on the occasion, Mr. Deepak Lamba - CEO, Worldwide Media said, “Filmfare awards have been the holy grail of cinematic honour in the Indian film industry. This an exciting and momentous occasion where we are extending this prestigious Filmfare Awards experience beyond the grand ceremony and hosting a special show for the superstars behind the camera. Changing the 65 years old format of the awards show will chart and pave ways for endless possibilities of innovation and opportunities.”

Adding to this, Jitesh Pillaai, Editor of Filmfare said, “Filmfare has always been a celebration for excellence and we felt that the technicians should be rewarded on a separate platform as they are truly the spine of the film industry. What makes this year even more exciting is that we are also taking our 65 year old legacy to Assam and exploring uncharted territory.”
Arun Sirdeshmukh, Business Head, Amazon Fashion India, said, “As the title sponsor for the 65thFilmfare Awards, Amazon India is delighted to bring together entertainment and fashion. Fashion at Amazon continues to be the largest and most preferred partner to fulfil India’s fashion needs and we will continue to create newer opportunities to engage with our customers across the country as we continuously strive to strengthen this position. We are delighted to be associated with Filmfare to felicitate the best of Indian cinema to reinforce Fashion & Beauty connect with our customers”.

NOMINATIONS FOR THE GRAND CEREMONY

Bollywood film based on social rom-com drama is coming...