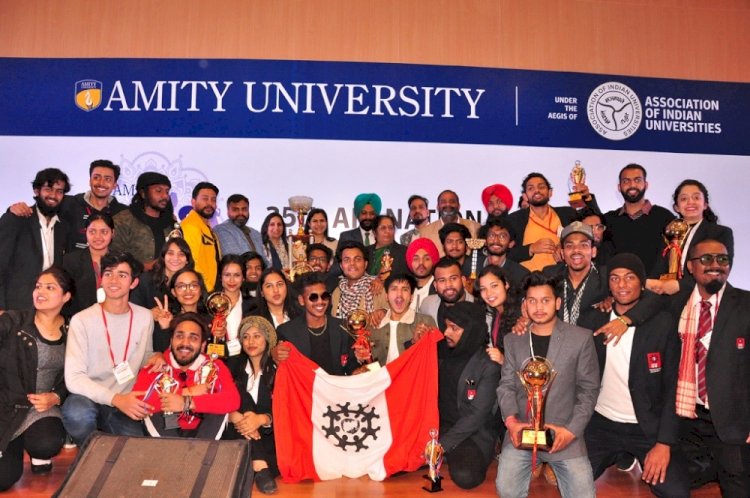 The five day fest saw the cultural depth of India with an aim to promote the exchange of culture, knowledge and talent in different states of our country.

Amity Utsav was the confluence of cultural activities which witnessed the participation of over 1600 students from 93 universities across India competed in around 25 competitions in categories of music, dance, literary, theatre and fine arts.

A participant from Banasthali Vidyapith shared her experience and termed it as a learning period. She remarked that it was a great opportunity to network with fellow participants who not only gave her a tough competition but at the same time, helped in making one’s performance better.

Ms. Rekha Lagarkar, team manager, Bundelkhand University, Jhansi expressed her delight over the support extended to the teams by the members of Amity University throughout the fest. She remarked that the theme of the fest based on Fit India Movement was very apt. “The cultural activities are equally important as sports for keeping a person healthy, physically and mentally.” she adds.

Congratulating the winners, Dr. (Prof.) Balvinder Shukla, Vice Chancellor, Amity University Uttar Pradesh said that it is the sheer hard work of each and every participant along with their trainers and managers that they were able to succeed. She further added that every participant is a winner since they have reached to this level of competition after performing their best in the zonal competitions. Dr. Shukla mentioned that this has been a week of creativity & innovation and the finest of India’s budding talent was under one roof. “Young India has lot of potential and talent in them which the world is yet to witness.” she opined.

Dr Baljit Sekhon, Joint Secretary, AIU thanked Amity for hosting the fest magnificently. He said that objective of organizing youth fest every year is to provide a platform to youth wherein they can showcase their talents in various activities and are recognized at National level.

During the valedictory ceremony, students of Banasthali Vidyapith performed a magnificent folk dance and students from University of Mumbai enthralled the audience with a powerful musical orchestrated performance.

Webinar on role of women in environmental sustainability