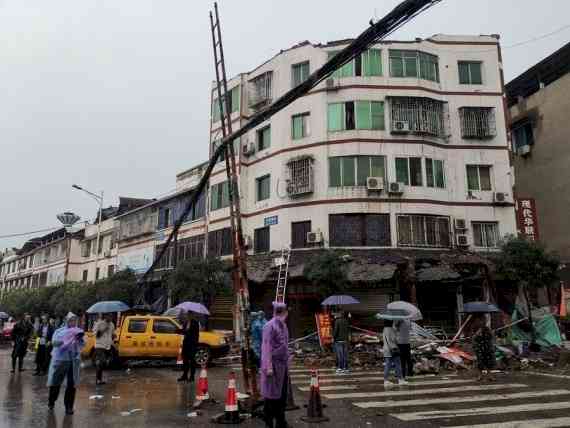 A total of 890 commanders and fighters from nearby fire-fighting and rescue brigades have been mobilised, while another 4,600 rescue workers are on standby.

There were a total of 737 collapsed houses, 72 houses with serious damage, while 7,290 with damage to some extent.

Collapsed walls and houses were seen on the way to rain-battered Jiaming township in the epicentre area.

Electricity in most of the houses in the town has been suspended.

Amid heavy rain in Fuji township, rescue workers were going door to door searching for people in the damaged houses and moving them to temporary shelters.

More than 6,900 affected residents have been relocated, and over 10,000 people were shifted to temporary shelters as of early Thursday morning, according to the local government.

According to the China Earthquake Networks Centre, the earthquake occurred at 4.33 a.m.

The epicentre was monitored at 29.2 degrees north latitude and 105.34 degrees east longitude. The quake struck at a depth of 10 km.

Approved by the provincial government, the earthquake relief headquarters of Sichuan has activated a level-II response, the second highest in China's four-tier earthquake emergency response system.

Some telecommunication base stations and cables were damaged.

The Luzhou high-speed railway station has been closed, according to railway authorities.

All coal mines have been ordered to halt underground operations and evacuate miners in shafts.

'France to make Covid booster shots available to all adults'

The Punjabi guest did not allow Taliban to form inclusive...

2 US Senators warn Biden against sanctioning India for...