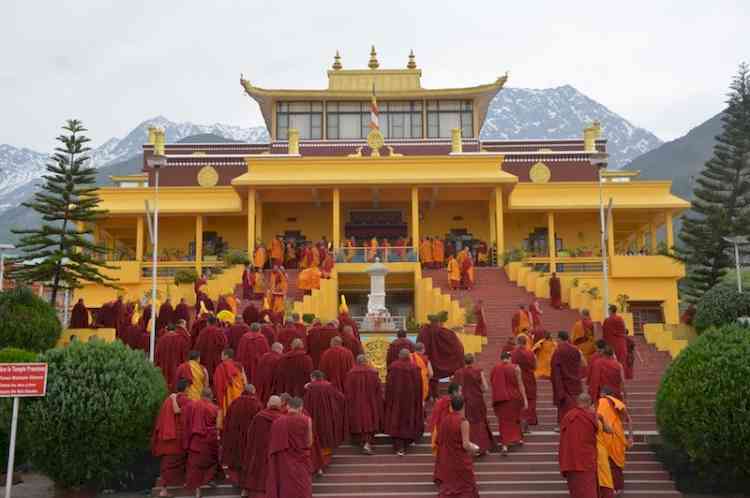 Dharamshala: A total of 154 Corona positive cases have been discovered from Gyuto monastery near Dharamshala in the past 8 days, as confirmed by Dr Gurdarshan Gupta , the district’s Chief Medical Officer of the district. The area has been declared a containment zone and sealed by SDM Dharamshala until further notice.

A cluster case was initially discovered last week where authorities declared 20 cases from the Buddhist establishment. Till date, around 330 monks have been tested and 154 have been found to be infected with the virus. The CMO office said last week that the infected monks had no history of travel.

The infected monks, majority of who are reported to be asymptomatic are being quarantined within the monastery compound.
When contacted DC Kangra Rakesh Prajapati said, “Investigation into cluster at Gyato Monestary revealed that Incident started after Losar (new year for Tibetan) festival on 14 Feb. About 15 monks came from Karnataka &Delhi. First cases reported on 23rd Feb. Out of 330 tested so far 154 are positive. 29 have been advised repeat sample by lab. Surprisingly all persons coming from outside have been tested negative. Only one patient in moderate category shifted to Tanda Medical College Hospital, rest are being managed in home isolation at a monastery.”

DC further said that everyone above the age of 60 in the monastery shall be vaccinated.

The Gyuto Tantric Monastery here, an important monastery of the Geluk school of Tibetan Buddhism where monks from Tibet, Mongolia, Ladakh, Sikkim and Spiti, are the resident students for Buddhist studies.

NMDC achieves best ever production and sales in February

UP farmer dies of shock after seeing crop destroyed by...