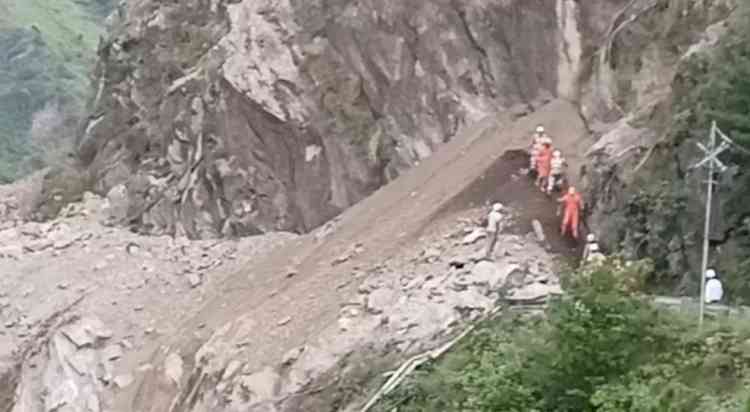 Shimla: At least 10 people were killed in a massive landslide on National Highway 5 in challenging terrain of Himachal Pradesh's Kinnaur district on Wednesday, while 13 others were extricated as rescue operations were launched to retrieve over 25 people feared trapped in the debris, police said.

The authorities suspect a truck, a state roadways bus, and other vehicles were buried in the landslide that occurred over a 60-70 metre stretch of the Shimla-Reckong Peo highway near Nigulsari, some 180 km from the state capital.

The bus has not been traced yet, Indo-Tibetan Border Police (ITBP) Public Relations Officer Vivek Pandey told the media.

"The terrain is really tough. Shooting stones are still a big worry and hampering the rescue operation. So is the rain. The main cause of the concern is that the bus has not been traced yet. There were more than 20 people in the bus. They may be 25 also. And the only worry is that the bus may have rolled into a 300-feet deep gorge and fallen into the Satluj river," he said.

"All other four vehicles were (buried) at the site... right now it is very difficult to tell anything about the number of casualties... there is no problem of manpower, we have stationed sufficient manpower to carry out even the rescue operation in the night," Pandey added.

Besides the ITBP, local authorities, the Army and the National Disaster Response Force (NDRF) are involved in rescue operations, which is likely to continue in the night also.

The Himachal Road Transport Corporation bus was on its way to Hardwar from Rekong Peo via Shimla.

Relatives of missing bus passengers approached the local authorities to know about their whereabouts. Most of the victims belong to nearby villages.

"A few boulders started rolling down just ahead of the disaster. Sensing trouble, I ran towards the other side and managed to save myself," a survivor said.

Chief Minister Jai Ram Thakur told reporters in Shimla that he directed the Kinnaur administration to speed up relief and rescue operation.

"The exact casualties in the landslide are yet to be ascertained. Sensing the gravity of the situation, the NDRF has been summoned for rescuing the people," he said.

A statement by the state emergency operation centre said one Tata Sumo was recovered from the debris and eight bodies found in it. Around 25-30 people are still buried under the boulders.

Prime Minister Narendra Modi and Union Home Minister Amit Shah spoke to Thakur and assured him of all possible help.

This is the second major natural disaster in Kinnaur in less than a month. Nine people, most of them tourists, were killed by a landslide as boulders fell and hit the vehicle they were travelling in.

Seven people died in the exceptionally high rainfall across the cold desert of Lahaul-Spiti district on July 27-28. Keylong and Udaipur subdivision of the district faced 12 incidents of flash flood after a cloudburst, in which the Tozing Nallah's impact was devastating.

Indians now believe in products 'Made in India': PM

No black marketing of onions and tomato reported: Centre