1-year compulsory army training should be given to bureaucracy: Mankotia 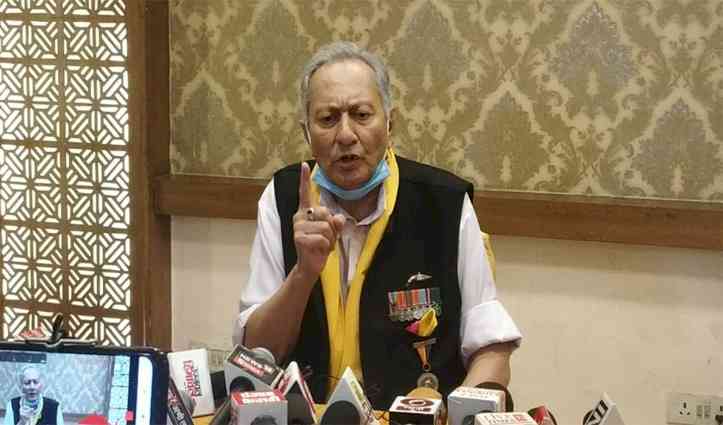 Dharamshala: President of the Himachal Ex-Servicemen League and Former Minister of Himachal Major Vijay Singh Mankotia said that bureaucracy should be given compulsory army training for one year, so that beside they become helpful in defence of the country, could gather the burning needs of the armed forces posted on border areas. “Not only this, the common man should also be associated with army training, so that in an emergency, India could field a large number of defence forces”, said Mankotia. He added that the politicians should also send their children in the army to set an example for the general public.
Mankotia was addressing a press conference in Dharamshala today. He said that what happened in Galvan was really sad. It is true that there is no difference between the animals and the Chinese who don't obey law. “We salute the soldiers who have been martyred during this skirmish. Our soldiers gave a befitting reply to the Chinese, playing on their lives and did not let them move forward. We must salute our forces,” said Ex Major.
Vijay Singh Mankotia said, "What is the reason that in 60 years, we are still not fully ready to fight China. We climb the roofs and call ourselves Global Economic Power. We have emerged as economic power in the world but have not yet become global military power. It is very important for us to become global military power. America is a world power and China has too prepared itself but India has yet to make its armed forces the most powerful in the world.”
The Ex-Army officer Mankotia who fought the 1962 China war has written an Open letter to PM Modi. This letter has written in detail about the sequence of events from the 1960s to the present day. He said that in every year the defence budget of the country was announced to be of a huge amount but the amount could not actually be spent in this direction. He said, “In the UPA government, there has been a heavy brokerage in defence deals. In which big names have their connections. This impact was on defence deals. Even now, the Congress is raising the finger on defence deals, but now there is no time for sluggishness.”
He said that China will continue to do such activities until we get on par with China to defend our boundaries. So, strengthening Indian Army is very much necessary.
He said that we should also pressurise China in other sectors, such as by recognising that Tibet as an independent Country. When America could raise the voice for freedom of Tibet, why are we silent? He said, “Indian government must give Bharat Rattan to Tibetan leader Dalai Lama, who is staying in India for the past 60 years and is a Nobel Peace Laureate. If we can honour Nelson Mandela with Bharat Rattan, what is the harm of honouring Dalai Lama?”

In safety of bankers and customers and to avoid banks becoming...